Which SUV Gives The Most Bang For Your Buck?

Over the past decade, the American Car Market has seen a change in its market demographics, people have moved on from buying Sedans or hatchbacks, due to the introduction of cheaper, newer SUVs that offer more seating and room for their passengers, while being in the same price range as the smaller sedans.

The feeling of sitting higher than the smaller sedans and the overall presence that is made when being in an SUV is what drives most people to buy one over a smaller sedan or a car in a similar segment.

Now, within the SUV segment, there is a wide variety of cars to be chosen, ranging from the Large 7-seaters to the Top Range, luxurious examples, to the regular spec, compact cars that will give you the best value.

Let’s compare the offerings of different manufacturers and see what they have to offer at base MSRP.

1. The Toyota RAV4, which sits in the compact crossover SUV segment is priced at $26,050 for the base variant, it is a bit expensive than what the rivals have to offer, but since it is a Toyota, you know you are buying a quality product with a reputation to go with.

With that being said, a few lackluster things about the car, the engine which is a naturally-aspirated 2.5l 4 cylinder, feels lethargic as it is a motor better suited to be in smaller sedans. A better option is to go with the Hybrid variant of the car, as it’s more powerful, but that raises the price quite a bit.

2. The Honda CR-V, which also belongs to the compact crossover SUV is priced at $25,350 for the base model, albeit it has slightly larger dimensions than the RAV4. Honda cars are known for their reliability and robust designs, with the CR-V being no exception. The 1.5l 4-cylinder turbo engine generates 190 horsepower, paired with a CVT transmission, is very peppy and has great acceleration while offering great fuel economy, it is the same engine found In the Honda Accord sedan.

The only dull aspect of the car is found within the interior, which is the infotainment system, which is very clunky and unintuitive if that doesn’t matter much to you, the CR-V is a great SUV for you to consider.

3. Nissan Rogue is Nissan’s ticket to the compact crossover SUV market, sitting at a cool $25,278 for the base ‘S’ variant. It has been completely redesigned for the 2021 model year, a huge upgrade from its predecessor which had bad quality plastics all over the interior.

It was also heavily criticized for its notoriously bad CVT transmission that was known to fail prematurely, which has been fixed and taken care of for this generation. Overall the Rogue has a lot of technology to offer and has one of the best interiors in this segment. 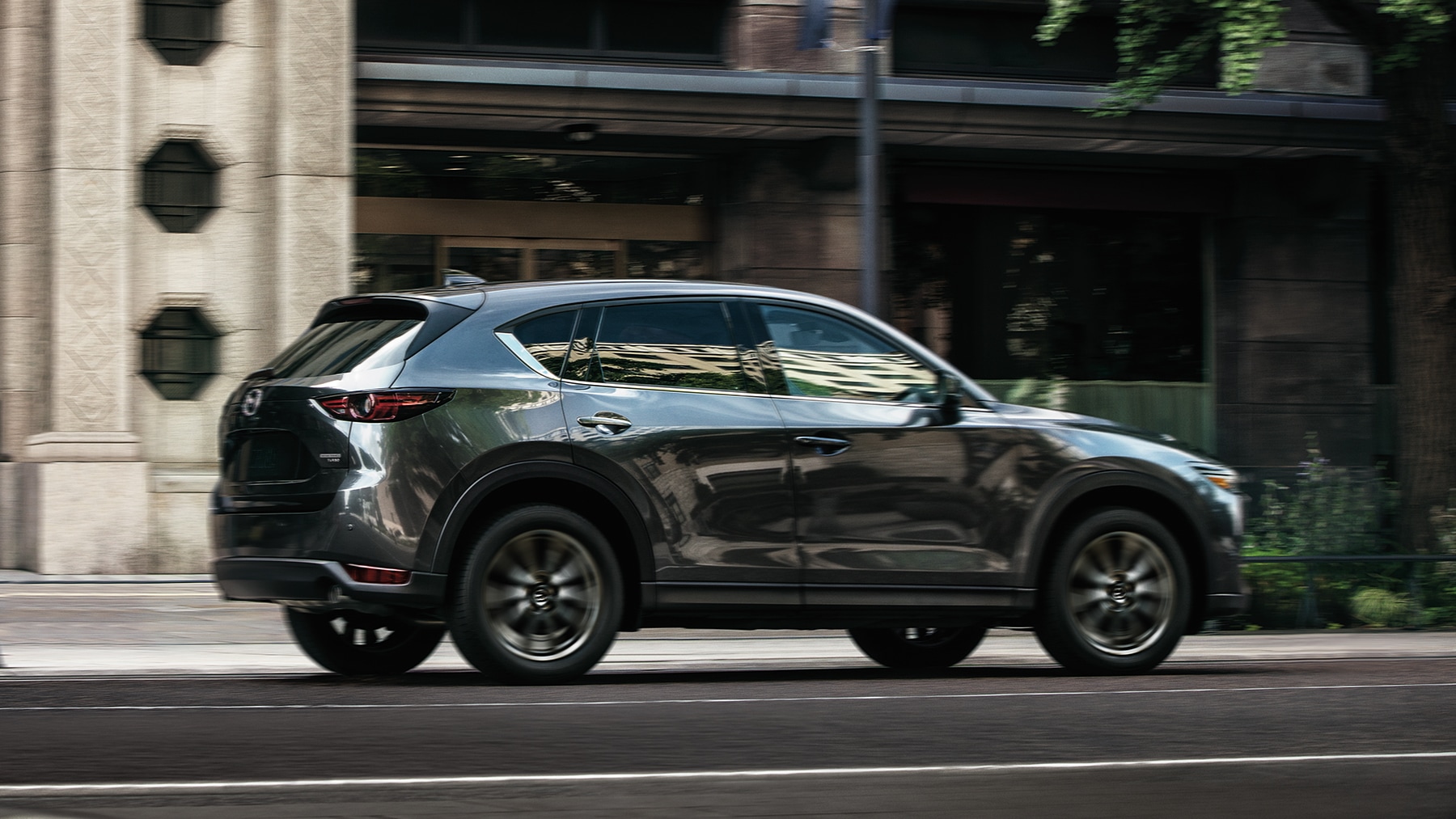 4. Last but not least, for this segment, the 2021 Mazda CX-5 is Mazda’s answer to all of its rivals, the CX-5 has the best build quality in its segment, with great exterior and interior aesthetics. It is priced similarly at $25,270. Although the spec-sheet of the CX-5 is very promising at first sight, more cons seem to overshadow the pros of this car.

Firstly, the base engine lacks power and always feels overworked, the optional turbo engine can be equipped, but that increases the price by a fair bit, especially considering the CR-V having a turbo engine in the base model as well. The ride is very harsh and uncomfortable too for its segment, less rear legroom and cargo room along with these factors make the CX-5 a less interesting choice.

Within the compact SUV segment, Japanese automakers lead by example, there are many other American competitors too, but they offer less bang for the buck as opposed to their Japanese counterparts. With that being said, the Honda CR-V offers the most bang for the buck, with a powerful engine and a host of features.

Let’s explore some of the Mid-size SUV options and see which one offers the most bang for the buck in this segment.

1. Kia Telluride is Kia’s latest 7-seater SUV in the mid-size SUV segment, pricing starts at a reasonable $34,141 for the base model. Kia manages to pack an insane amount of technology into their latest offering and the strong sales are a testimony to their solid build quality and reliability.

It is offered with a 3.8 V6 with 291 horsepower, all-wheel drive is optional except on the top of the line model in which it is standard. The only flaw is that the car doesn’t handle as well as some of its competitors, but you don’t exactly buy a 7-seater SUV for its handling.

2. The Ford Explorer is Ford’s long-standing 7-seater SUV offering, fully redesigned for the 2020 model year and lightly refreshed for the 2021 M/Y before the larger behemoth, the Expedition. The explorer only is priced at $32,225 for the base model, but can soon become scarily expensive as you add options.

The best value for this SUV is when purchased as a mid-spec vehicle, it then offers a lot of value. Engine options include a 2.3l 4cyl turbo with 300 horsepower or a 400 hp turbo v6.

3. The 2021 Toyota Highlander is Toyota’s midsize SUV offering, with up to 3 rows of seating for eight passengers or 7 if you equip the optional captain’s chairs. All variants are powered by 3.5 litre v6 with 295 hp with an eight-speed automatic.

The Highlander offers a lot of features and tech for the price and is a very robust and reliable car. The only cons are that the third row is specifically meant for kids only along with the fact that cargo size is less than the competition.

This segment is a tough one, as many SUVs in this segment all have unique features and designs, along with varying price tags, but there is a clear value king here, the Kia Telluride has a whole range of features and a sporty engine that delivers to you. 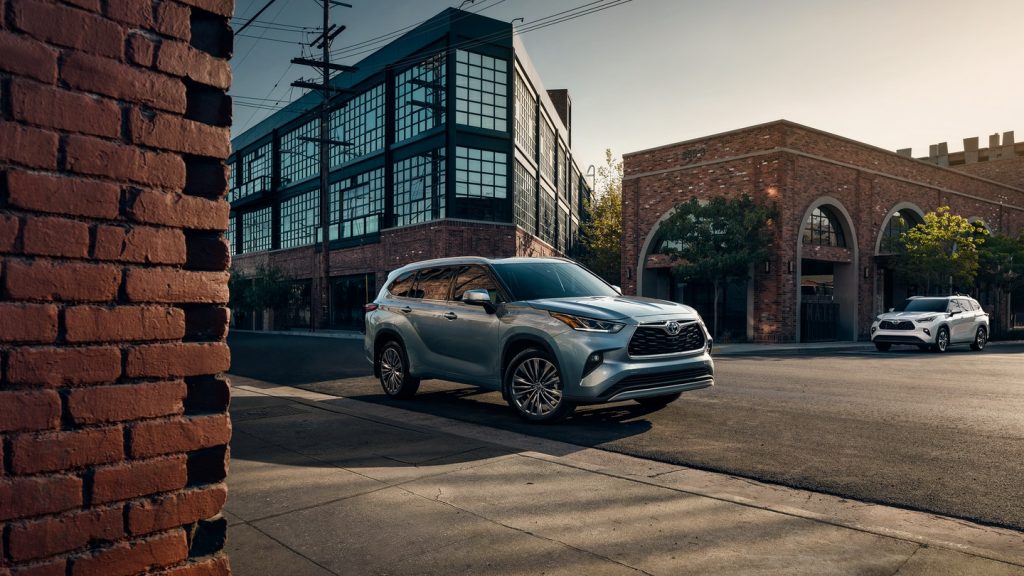